Just a day ago whole bunch of people getting worried and sharing goodbye posts on Twitter and Instagram since they thought the platforms are going to be banned by the Indian government. Now they have something else to worry about – the government recording them on WhatsApp. A fake message has been going viral on WhatsApp and a few other platforms that claims that once the new IT rules are implemented, your WhatsApp calls and messages will be recorded.

The message states that all calls will be recorded and saved. All social media accounts will be monitored and thot your devices will connect to the “ministry system”. The message then goes on to warn you that you should not send any “bad post or video” against the government or the prime minister and that doing os is “currently a crime” and can lead to you getting arrested without a warrant. Oh, and that the police will also issue a notification and you will then be prosecuted by “cyber crime”, “which is very serious”. 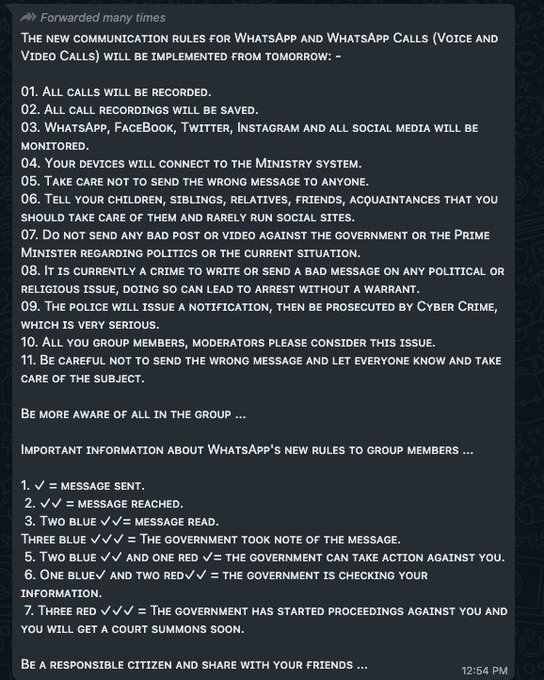 We’d like to inform you here that none of this it true. WhatsApp remains end-to-end encrypted for all messages and no one, not even WhatsApp and Facebook or the government, can read them.

As you can see from the screenshot, the message has been “forwarded many times” and is doing the rounds at a point in time when WhatsApp has gone to court over the new IT rules, which includes a traceability clause. WhatsApp is challenging these traceability rules, among other things.

Please do not forward this message if you receive it. It’s fake. Also, WhatsApp has not implemented any new communication rules and it definitely does not have three ticks for anything, no matter what the colour. Trust us, we’d know if it did. One tick on WhatsApp means your message has been sent, two means it has been received. If you have read receipts on, then once your message is read the ticks turn blue.